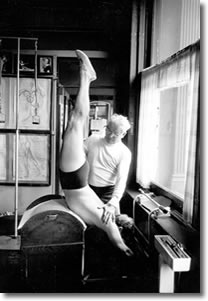 The Pilates method of body conditioning is a unique system of stretching and strengthening exercises developed over 100 years ago by Joseph H Pilates. He called his method CONTROLOGY.

Joseph Hubertus Pilates was born on December 8, 1880, in the German town of Monchengladbach, not far from Dusseldorf. A sickly child he was determined to overcome his various afflictions. He studied bodybuilding, gymnastics, skiing, yoga, Zen meditation, and rigorous exercise regimens of ancient Greeks and Romans. By age 14, he had gained enough strength to become an accomplished skin diver, skier, gymnast, and was posing for anatomy charts. In 1912 he went to England and became a boxer, worked as a circus performer, and trained detectives in self-defense. Mr. Pilates was interned, along with other Germans, at the outbreak of World War I. He taught his fellow prisoners a series of exercises combining physical fitness with breath control and mental acuity to increase strength and flexibility. He spent the later part of the war on the Isle of Man working as a hospital orderly. He helped rehabilitate patients through resistance exercise using equipment fashioned from bed springs, among other things. After the war, he returned to Germany and continued pioneering his unique approach to physical fitness. When the government insisted he train the new German army, he immigrated to the United States and established the Pilates studio in New York City with his wife Clara. 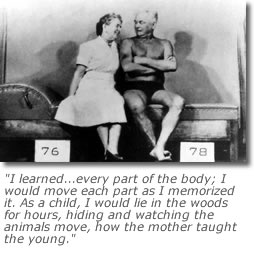 Mr. Pilates designed a series of more than 500 mind-body movements or exercises to develop strong, flexible muscles without adding bulk. An emphasis on breathing and torso strength ensured improved posture and reduced stress and risk of injury.

Early devotees of Joseph Pilates included such dance legends as George Balanchine, Hanya Holm, and Martha Graham. You can see Mr. Pilates influence in the techniques each of these choreographers developed. Today’s followers include dancers, athletes, physical therapists, fitness trainers, health care professionals, and those interested in optimal health and fitness. It is said that Mr. Pilates believed we are only as old as our spines are flexible.

Mr. Pilates Died in 1967 at the ripe old age of 87. His principles he developed and are taught in the Pilates technique are as follows:

Centering – working from the center of the body’s “powerhouse” – the abdominals, gluteus, and hamstrings

Control – every moment is controlled from beginning to end

Precision – performing fewer repetitions but with more concentration to ensure the correct muscles are performing the exercise.

Fluidity – maintaining a smooth movement pattern, not jerking or jarring

Concentration – the mind-body connection, complete focus on your body, he did his work in silence to eliminate distraction and encourage ultimate concentration on the breath.

To learn more about the Pilates Method visit http://www.pilatesmethodalliance.org/pmapositionpaper_on_pilates.pdf

What can you expect to gain from Pilates?